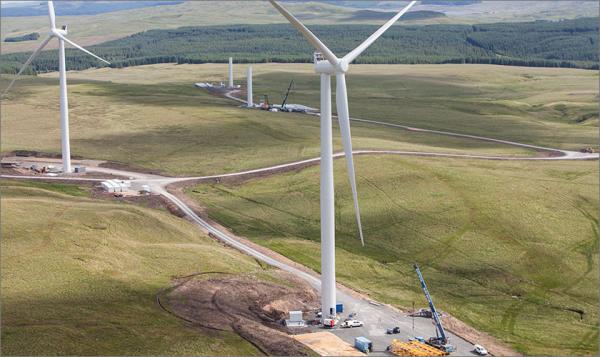 More than 1,000 people are currently building a total of eight wind projects for the company across the Central Belt and south west of Scotland. Work is progressing at pace with 221 turbines being erected, representing an investment of more than £650 million.

Over a 9 month period alone, ScottishPower Renewables awarded nine turbine contracts with a combined value of over £350million. Once completed, this investment in green energy will deliver 474 megawatts (MW) of new electricity capacity.

The projects will see over 145km of new roads constructed on the windfarms, roughly the distance between Glasgow and Carlisle, to provide access for turbine deliveries to their final locations.

The largest site under construction is at Kilgallioch, which straddles the border of South Ayrshire and Dumfries and Galloway. At 96 turbines and 239MW, it will become the third largest onshore site in the UK and will be capable of powering more than 130,000 homes.

At the peak of construction at Kilgallioch there were more than 300 people working on site and the project will create 13 full-time posts once it is completed next year.

Kenny Peberdy, Onshore Director at ScottishPower Renewables, said: “Scotland is one of the busiest places in the world right now for the construction of onshore wind, with thousands of engineers and technicians and support workers delivering a raft of large-scale renewable energy projects. We are currently building more projects at the same time than we’ve ever built before through an unprecedented level of investment this year."

Other sites where ScottishPower Renewables is working include two extensions at Black Law near Shotts, North Lanarkshire; two phases at Ewe Hill near Lockerbie, Dumfries and Galloway; Dersalloch east of Straiton in East Ayrshire; an extension at Harehill near New Cumnock in East Ayrshire and Glen App in South Ayrshire north east of Cairnryan.

The company is a leading renewable energy installer specialising in commercial solar PV installations. From its carbon-neutral technology park based outside of...

UK businesses will comes together to tackle the energy efficiency challenge head on at EMEX at ExCeL in London November 22-23. Many businesses have an enormous...

EMEX And The Energy Efficiency Megatrends

EMEX (www.emexlondon.com) and its community is returning to the ExCeL Centre in London on November 22-23 with a packed programme spread across four free-to-attend CPD...

The Crown Estate has published its 5th annual Offshore Wind Operational Report, with the latest data signalling a bright future for the sector. The report, which was...

Following the recent announcement by (at time of publishing) Scottish First Minister Nicola Sturgeon at this year’s All Energy Event in Glasgow, SHARC Energy...