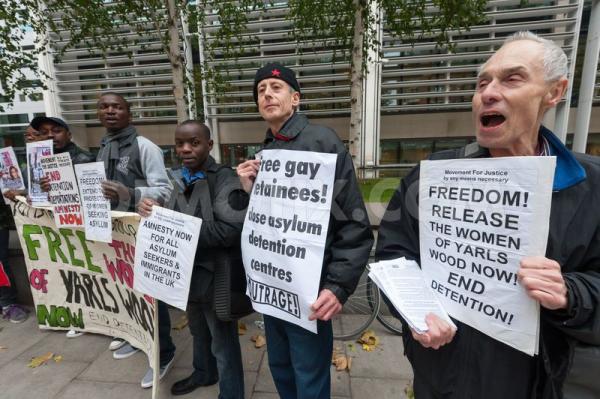 The controversial women’s immigration detention centre of Yarl’s Wood has received a scathing report by HM Inspectorate of Prisons - with Serco coming off much better than G4S.

In its report, HM Inspectorate of Prisons (HMIP) had found serious deterioration in certain areas which led Nick Hardwick, Chief Inspector, HMIP, to conclude that Yarl’s Wood was ‘rightly a place of national concern’.

The report believed that the Bedfordshire based immigration centre ‘has deteriorated since our last inspection and the needs of the women held have grown. In my [Hardwick’s] view, decisive action is needed to ensure women are only detained as a last resort.’

A series of exposés, most notably by Channel 4 News in March this year, led to the visit by HMIP in April and an independent review by Kate Lampard.

The problems that the report highlights have shown how fragmented the service is, leading to difficulties in running the establishment effectively. Those charged with certain services have stated that criticism for shortcomings is unfair because the alleged failings have not been part of their remit.

There are four organisations responsible for Yarl’s Wood:

The report apportions blame to all of the responsible organisations and contractors but not necessarily in equal measure. Serco, for example, while accepting that it had to improve, accentuated the positives.

Julia Rogers, Serco’s MD Home Affairs, noted some relief that the report was not overly critical of its staff and relations with those detained. “We are pleased that in their conclusions they found that four out of five residents said that ‘staff treated them with respect’ and that they ‘did not find evidence of a widespread abusive or hostile culture amongst staff and that ‘most staff work hard to mitigate the worst effects of detention’.”

Ms Rogers also picked out the finding from the report that there ‘should not make the mistake of blaming this on the staff on the ground’.

However, Serco accepts that there was a need to increase the proportion of female staff in the centre and it had just completed a training course from which 11 new female officers graduated. It had already started another recruitment campaign for a further course that would commence in the autumn. “We are also conducting a full review of the reception and induction processes and efforts are being made to shorten the time that women spend in reception when arriving at the centre,” stated Ms Rogers.

However, there was sharp criticism reserved for the other contractor, G4S and its healthcare provision to detainees. The report stated: ‘Of all the areas in the centre, health care had declined most severely. G4S Justice Health had provided health services since September 2014. There were severe staff shortages and women were overwhelmingly negative about access, quality of care and delayed medication. Local governance was poor.’

The report went on to note that care planning for women with complex needs was so poor it put them at risk. The available mental health care did not meet women’s needs and this made it ‘particularly unacceptable’ that a number of women with enduring mental health needs had been detained.

The small ‘enhanced’ care unit was located in health care and was used to isolate women. It was effectively used as an inpatient unit although it was not commissioned, resourced or registered to be so. Pregnant women had prompt access to community midwives and reasonable anti-natal care but we saw two instances where abdominal pain in early pregnancy was not managed appropriately. ‘Pharmacy services were chaotic. The Care Quality Commission issued three requirement notices following this inspection.’

The report also called into question the failure of the Home Office to process the detainees quickly enough, leading many to suffer from depression to the point of being suicidal.

‘In my view, decisive action is needed to ensure women are only detained as a last resort,’ said Mr Hardwick in his report. ‘Procedures to ensure the most vulnerable women are never detained should be strengthened and managers held accountable for ensuring they are applied consistently.’

As the most serious points concerning shortcomings in service providers were laid at the feet of G4S, it has responded to the allegations.

The company was at pains to point out that the report acknowledged a number of the challenges which it had ‘inherited’ at Yarl’s Wood when it took over the healthcare provision in 2014 from Serco Health. It told TWinFM is was currently ‘reconfiguring the service’ to address a growing number of more complex medical requirements at the centre.

“To better meet the needs of detainees, we have worked with NHS England to change our contract so that together we can ensure we are providing the right services,” stated John Shaw, MD for Public Services, G4S. “We have prioritised providing primary care and I am encouraged that inspectors have found that access to those services is good. There are now more GP hours delivered at the centre than ever before and no detainee waits more than three days for a non-emergency appointment.”

Mr Shaw went on to state that G4S had been appointed by the NHS to deliver healthcare services at Yarl’s Wood on the strength of its record in detention settings, including immigration removal centres.

Picture:      Yarl’s Wood immigration detention centre has been the centre of concern including a demonstration like this one in 2012. Now there has been a damning report on its operation and treatment of inmates.

Serco Employees Set to Strike Over ŌĆśLow Pay and ExploitationŌĆÖ

G4S, the global security company, has been acquired by North American security and FM business Allied Universal. With an acquisition value of £3.8 billion, the...