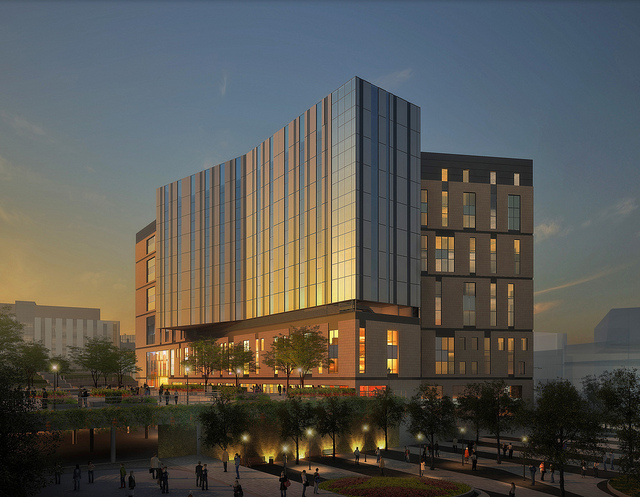 The boss of Royal Liverpool Hospital NHS Trust has been accused of snubbing Carillion hit maintenance workers whilst planning to have them taken on by a new company rather than taking them back in-house. Kehoe also says the trust is working on a way forward for former Carillion construction workers on the massive redevelopment of the hospital similarly to be 'housed' in a new company.

The boss at the Royal Liverpool Hospital has refused to meet Unite, the union claims, over the future of maintenance staff now in employment limbo because of the controversial Carillion collapse.

Unite said that Aidan Kehoe, chief executive at the Royal Liverpool and Broadgreen University Hospitals NHS Trust, had snubbed the more than 50 workers responsible for the repair and maintenance of the trust’s existing buildings.

"There are highly complex discussions taking place between various parties to get subcontractors back on site as soon as possible. However many of these firms are facing financial difficulties as a result of Carillion’s collapse, therefore this process will take some time. Given this situation, we expect a significant delay and it will prove challenging to get the new Royal finished before the end of the year."

Hard FM services
Kehoe also explained that The Hospital Company has plans to arrange for a new company to be established that facilities management workers will be transferred to. In the meantime, staff and subcontractors continue to be paid by PwC and services continue to be delivered to both the Royal and Broadgreen sites.

A spokesperson for the hospital said: “We understand that facilities management staff are concerned and we know that this has been an uncertain and difficult time for them. Our primary concern is for staff and we have said this publicly on a number of occasions.

“The Hospital Company (Liverpool) has plans for a new company to be established that facilities management workers will be transferred to. In the meantime, the Hospital Company (Liverpool) is paying PwC weekly so that staff and subcontractors continue to be paid by PwC and services continue to be delivered at our hospitals. Staff have been reassured that they will be paid by PwC as long as it takes to establish a new company. We have also reassured suppliers and the supply chain that they will be paid to ensure service delivery."

PwC (or Price Waterhouse Cooper) are acting as the Special Managers to administrate bankrupt Carillion.

No refusal
The hospital spokesperson continued: “We haven’t refused to meet with Unite and the chief executive is meeting with various trade unions, including Unite, later this month. Facilities management staff have had the opportunity to talk to the chief executive directly at our monthly face-to-face brief with staff and we are doing everything we can to ensure they are kept up to date by the Trust.”

Unite
The union said the workers, employed by Carillon, were legitimately concerned about their future - and the best course would be for their roles to be taken back in-house rather than transferred in to a new company. Unite regional officer Keith Hutson said: “These workers are in an employment limbo through no fault of their own – they are the victims of the feral capitalism that was the cause of Carillion’s dramatic collapse.

“The fact that highly-paid NHS boss Aidan Kehoe is unable to meet Unite to discuss the future of this group of hardworking maintenance staff is a disgrace and a snub.

“These workers are responsible for the daily maintenance of the trust’s buildings and all the health & safety implications this entails. They are separate from the new build at the Royal Liverpool Hospital which is unlikely to be finished this year.

Another transfer
Hutson continued: “These workers are now stranded in an employment ‘no man’s land’ and could be transferred to a new outsourced provider at any time. We would want to avoid that as we don’t want their pay and conditions salami-sliced by a new company engaged in a race to the bottom. As Carillion is in liquidation, TUPE (Transfer of Undertakings (Protection of Employment) regulations) don’t apply and these workers face loss of continuous service which will impact on their future pay, employment conditions and pensions.

“The mature and sensible way forward would for the trust to take these jobs back in-house – and that is why Aidan Kehoe’s intransigent stance is doubly disappointing. We call on him to have an urgent rethink.”