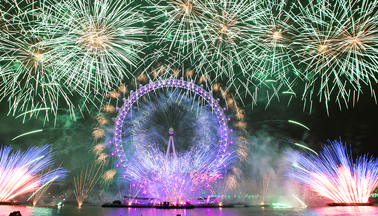 After a traumatic Friday in London on November 29, some cheer will return this Friday with the Aldgate Lantern Parade and Winter Fair. Sadly though, there are no NYE tickets left for the fireworks on the Embankment.

Aldgate in Winter is back to celebrate the build up to the festive season (although Diwali was way back  at the end of October).

Building on the success of the past two years, the free event, run by the City of London Corporation in collaboration with community groups, organisations, schools and businesses, is open to all on Friday December 6.

The Aldgate Lantern Parade will feature over 500 lanterns made by children and adults from across the local area. The parade will launch from Sir John Cass’s Foundation Primary School at around 4:45pm and move through the streets north of Aldgate High Street to the beat of the Barbican’s Drum Works, leading to a festive fete in the new Aldgate Square.

The Winter Fair will simultaneously take place between Aldgate Square and St Botolph without Aldgate, complete with an array of performances, art, food, drink and festive activities.

Randall Anderson, Chairman of the City Corporation’s Community and Children Services Committee, said of the fair and parade: “Not only do they promote a sense of community, they also showcase the cultures, talent and businesses in the Square Mile and neighbouring areas."

The final 20,000 tickets went on sale last week - and sadly there are no more left for London’s spectacular New Year’s Eve fireworks.

A global television audience will be watching as more than 100,000 ticket-holders gather opposite the London Eye to welcome in the new decade in style.

The pyrotechnic and lighting display features more than 12,000 fireworks and 2,000 lighting cues choreographed to music. It will start with the recorded sounds of Big Ben’s chimes, despite them being silent this year due to renovation works.

If you are a business or resident that is affected by pedestrians and road restrictions, sign up to receive important information about how you may be affected (the final plans are still to be finalised).

Here is the current restrictions map

Emergency shelters for the homeless

For the first time this winter, emergency cold weather shelters across the capital were opened last week (ending Nov 29) as temperatures were set to hit zero or below in several London boroughs.

The Mayor (Sadiq Khan), London councils, service providers and faith and community groups work together to open severe weather shelters across London when freezing temperatures are forecast anywhere in the capital. Previously, shelters were opened on a borough-by-borough basis, leading to patchy, inconsistent provision.

Between 1 July and 30 September 2019, the Mayor’s rough sleeping services worked with 1,543. This work is complemented by the compassion of Londoners who have donated to the Mayor’s charity appeal and referred people they have seen sleeping rough to outreach services through the StreetLink website or App.

Last winter Londoners donated a record £247,742 to the Mayor’s winter rough sleeping campaign. The funds were split equally between the 22 charities who make up the London Homeless Charities Group.

Londoners concerned about someone they have seen sleeping rough can use the StreetLink website (https://www.streetlink.org.uk/) or App to send an alert. The details provided are sent to the local authority or outreach service for the area in which the individual has been seen, to help outreach workers find them and connect them to support - Click Here

Picture: Let the fireworks and festivities begin and below the restrictions on NYE so far.