A Bridge Not Too Far from Completion 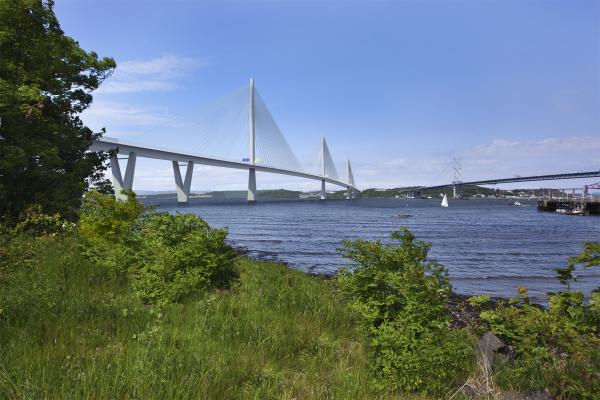 The landmark Queensferry Crossing in Scotland promises to be one of the most efficient, high performance bridges ever built.

Designed to incorporate a complex array of utilities and communications equipment, a partnership between cable management specialist voestalpine Metsec plc, M&E fixings supplier MEF and specialist M&E contractor SES Engineering Services Ltd (SES), has been critical in ensuring the delivery of the systems that will support the 2.7km road bridge and ensure its safe and efficient running for decades to come.

Due to open in May 2017, the Queensferry Crossing forms the centrepiece of a major upgrade to the cross-Forth transport corridor in the east of Scotland. It will be the longest three-tower, cable-stayed bridge in the world and represents a Scottish Government capital investment of more than £1.3bn.

The 250-tonne steel bridge sections arrive in Rosyth docks from China, where they are then prefabricated to incorporate all of the services and road surfaces. The cable management systems supplied by Metsec are prefabricated into 424 modules by SES and then installed into each of the 110 finished 750-tonne road section decks before they are taken out by barge onto the River Forth and then lifted by crane to connect to the span between the bridge towers.

All of the cable management products used had to be pre-approved by the construction contractors, the Forth Crossing Bridge Constructors Consortium (FCBC) which consists of HOCHTIEF Solutions AG, American Bridge International, Dragados S.A and Morrison Construction. Due to the extreme temperatures, thermal extension couplers for cable management were designed into the project with the support of the Metsec team to help compensate for the movement of the bridge due to temperature fluctuations, wind and traffic.

Gordon Cullen, Contracts Manager at SES explains: “While we have extensive experience in major infrastructure developments, the Queensferry Crossing is a once-in-a-lifetime project that demands a highly collaborative approach to ensure we can meet and match the exact requirements to deliver all of the component parts of the bridge on time and on budget.

“MEF are a part of the SES approved supply chain and they selected Metsec not only because they were the best from a commercial and quality point of view, but because they were able to supply the cable management systems we needed in bespoke sizes, vitally important in terms of minimising waste and ensuring ease of fit. Particularly important was their willingness to adapt the units to minimise the number of joints required. Everything was spot-on in terms of enabling the teams to fabricate and install each unit on schedule.”

Metsec supplied hot dip galvanised cable tray and cable ladders cut to special size lengths, the trays to 3.5m and the ladders to 6.9m. The finished modules assembled by SES will hold a complex array of water management and cabling needs, from lighting and power, traffic management systems, security, fire alarms, radio communications, structural health monitoring and building monitoring, all designed to give optimal control over the management and performance of the bridge.

Cullen continues: “It’s a highly complex installation that effectively acts as the ‘brains’ of the bridge, controlling everything from the timing of the lights to maintenance planning with a focus on optimising efficiency and communications not just on the bridge itself but on how it communicates with the traffic management systems that feed into it.”

Alistair Fairweather at MEF adds: “This is a fantastic project to work on and much of our involvement has been down to the support we have had from Metsec. We have worked with them for six or seven years and we knew that their involvement would be vital to us winning this contract. The sizes needed were not standard, but their UK-based manufacturing capabilities gave us the option to offer a flexible, high quality solution to SES that we knew Metsec could fulfil to deliver on time and on budget. In fact, flexibility was critical not just in securing the project but in meeting evolving requirements as the project has progressed over the past 12 to 18 months.

“We have put a lot of faith in partnering with Metsec for what has been one of the biggest projects we have ever worked on and it has really paid off. The reliability and the quality of service from the Metsec team has been as important as the quality of the product. The 55 micron hot dipped galvanised steel tray and ladder systems used will need to endure exposure to the elements for up to two years before being completely sealed in under the bridge, and the high quality of the product will contribute to keeping the whole life costs of the project down.”

Jon Hillier, Director at Metsec cable management division added: “The Queensferry Crossing project was something we were keen to be involved in from the start. We knew we had the capability to re-programme our mill to allow us to manufacture the specified lengths of ladder and tray in a way that would fit perfectly into the required modules. Working with MEF meant that we were also able to offer the just-in-time capabilities needed to support the tight prefabrication scheduling for each deck for the bridge. We are really excited about seeing the bridge completed and operational next year, knowing that our products are effectively supporting the complex systems that will drive the functionality of a bridge that is not only destined to be an infrastructure showpiece, but will help drive transport connectivity in the region for years to come.”

David Cameron has paid a visit to the £33 million retail and residential regeneration project in Shirley town centre in the West Midlands. The project is...