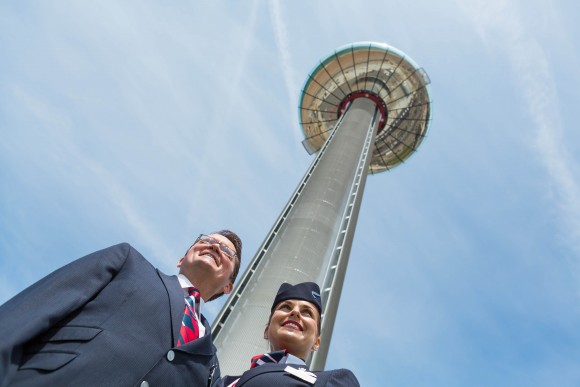 You couldn't have written it - well ThisWeekinFM could - the brand new British Airways' observation tower (which opened to the public on August 4 on Brighton seafront) got stuck with 180 passengers on-board on Thursday September 8 evening.

East Sussex Fire and Rescue Service were called at 18.39. Two fire engines from Preston Circus attended the scene. Crews assessed the situation and spoke with the management in charge of the attraction. They were given assurances that specialist engineers were working on the problem and that pre-agreed procedures were being followed and so stood down to standby.

British Airways said the problem was merely a technical hitch. Whilst most passengers - a private party - were reportedly in good spirits as Tweets went out from the stranded. There were only minor concerns expressed for a pregnant woman amongst the group of 180.

The 'ride' only made it so far up before it shuddered to a halt. it took about two hours for it to be returned to ground level.

The BBC obtained a quote from a Mr Tim Jones, one of the party organisers, who apparently said: "We were told by staff to move to one side of the pod to 'recalibrate the weight' - which made some people a bit nervous. They kept quiet about the emergency toilet until we were nearly on the ground."

China's Tianmen Mountain and the Zhangjiajie scenic area with its range of glass bridges has been closed simply as the authorities could not handle the enormous number of visitors - 10 times what was expected.

At least 110 people were stuck following a cable car failure over the French Alps (Thursday 8) - fifty were rescued relatively quickly; 60 are/were obliged to spend the night hanging over Mont Blanc.

Picture: In the sticky stuff - British Airways may have some explaining to do about its i360 not taking-off correctly