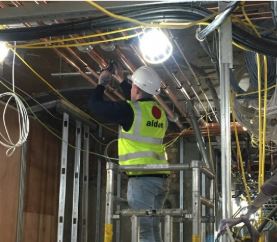 Operatives across the building services contracting sector will receive salary increases of more than 5% by 2020, following the latest round of national wage negotiations between employers and the trade union Unite.

The Building Engineering Services Association (BESA) – representing the industry’s employers – settled on an hourly rate increase of 2.5% from this October followed by a further 2.75% rise from October 2019.

Both parties described the process as positive and constructive as they confirmed the second phase of the four-year national operative wage settlement. Phase One, which covered October 2016 to September 2018, also included a forward commitment of improved index benefits and an additional day of paid annual holiday entitlement, effective from February 2020.

Unite and BESA are also committed to keeping the dialogue going in order to address issues of 'mutual concern', including the skills shortage and the need to increase the number of apprentices being recruited into the industry.

“A very positive collaborative spirit has developed between the negotiating parties over recent years,” said BESA Head of Employment Affairs Paula Samuels. “This has allowed us to reach a conclusion that is fair and in the interests of both the employers and the operatives, who provide the skills that are vital to our industry and its clients.”

She added that having constructive dialogue was particularly important this year because of the growing economic uncertainty caused by Brexit and the collapse of Carillion, which had thrown many industry supply chains into chaos.

“This is an extremely challenging time for employers in our sector, which makes planning for the future a very tricky exercise,” said BESA President and chief negotiator Tim Hopkinson. “However, we also have solid grounds for optimism. There is growing demand for our specialist skills and expertise as the UK embarks on an ambitious infrastructure programme and seeks to upgrade its commercial and residential building stock.

“It is extremely helpful, therefore, to be able to conclude these important negotiations positively so everyone can look to the future,” he added.

Picture: The Building Engineering Services Association and Unite have negotiated a better deal on pay.