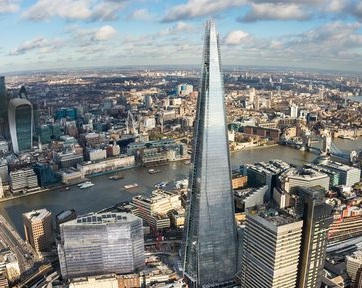 The decision by Sapphire Systems to move to London’s Shard means the 72-floor building will be almost full.

The Shard now has 26 companies across 14 business sectors in its office space in the London Bridge area which is now the second largest Fin Tech hub in London following Sapphire Systems’ impending move from the City.

A total of 15,700 sqft of office space will be let by REM on behalf of The Shard to the international provider of financial and business software systems where will occupy the north side of Level 9.

Sapphire Systems is The Shard’s eleventh letting to be confirmed this year, reinforcing the attraction of the London Bridge neighbourhood to ‘progressive’ companies. The area has a number of attractions, including the rich culture and social amenities of the neighbourhood – from Bermondsey Street to the famous Borough Market as well as the obvious transport links.

“We are delighted to be moving to The Shard,” said Ian Caswell, CEO, Sapphire Systems. “The excellent transport links and vibrant local neighbourhood will be of great benefit to our staff.”

Picture: The Shard is almost full with the move by Sapphire Systems to the London Bridge area

The London Shangri-La Hotel will open for business on May 6. It will be quite stunning – in keeping with Shangri La Group hotels around the world…it is the...