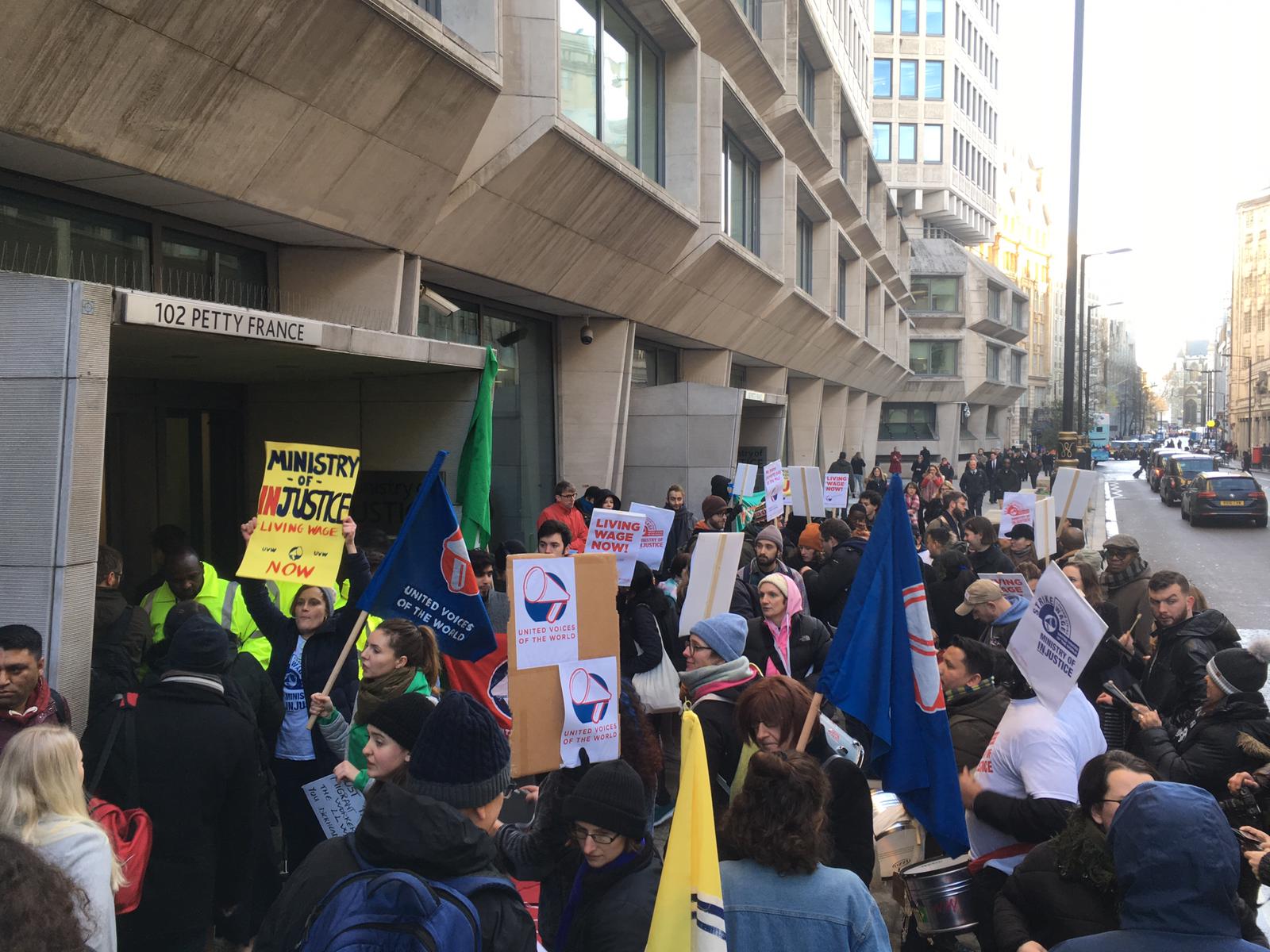 With the Government already in disarray over more Brexit drama, striking workers brought fresh disruption to the corridors of power on January 22 in fight for the living wage.

At the Ministry of Justice building, which is also home to the Crown Prosecution Service, entrances were blocked by a large crowd playing music, banging drums and handing out leaflets in support of striking workers, who are demanding to be paid the independently calculated London Living Wage of £10.55 an hour. Outsourced staff, employed via the private contractor, OCS, currently earn only £9 an hour – a wage that has been criticised by the United Voices of the World union (UVW) as ‘poverty pay’. The UVW is the organiser of the protest and strike.

The walkout at the Ministry of Justice was coordinated with outsourced colleagues at the nearby Department for Business, Energy and Industrial Strategy (BEIS), represented by the Public and Commercial Services union (PCS). Striking workers from both departments converged in Victoria Street before beginning a colourful march through Westminster, halting traffic and bringing Parliament Square to a standstill. They also targeted the Home Office, which many of the workers – almost all of whom are migrants – accuse of marginalising them.

“This Government is staggering through crisis after crisis, and constantly tries to distract from its own failings by whipping up fear and hatred of migrant communities,” said Shiri Shalmy, an organiser with UVW. “Today’s strikes are a powerful refutation of lazy tabloid narratives, migrants in Britain are at the forefront of the struggle against exploitation and poverty pay and are helping to push wages up for all.”

This week’s mobilisation comes after a series of protests were held last year by Ministry of Justice cleaning staff, during which the building’s entrance foyer was occupied by supporters. Security guards and receptionists were dispatched by management to try and contain the disruption – but after talking with their striking colleagues, many joined the union and are now participating in the walkout.

Workers received visits on the picket-line from a number of senior members of the opposition who wanted to express their solidarity. They included notorious leftie worker rabble rouser Shadow Chancellor John McDonnell and Shadow Justice Minister Richard Burgon, who accused the incumbent Justice Minister David Gauke of treating his own workers like dirt. “I am proud to stand shoulder-to-shoulder with the cleaners, security guards and all workers at the Ministry of Justice on strike for a proper living wage,” Burgon declared before heading back to his nice warm office and nice warm salary.

What the workers said

Fatima Djalo, who has been cleaning the ministry headquarters for over ten years, said: “Our wages have only increased by £1 since 2009. Many of us are working two or more jobs just to survive, with no time for anything but work. This place is supposed to be the home of justice in Britain but what is just about paying workers poverty wages and denying them the basics of a dignified working life?”

“I saw the cleaners protesting previously and I thought we, the security team, are also being treated unfairly,” said Cristina Albores Miguez, who works on the reception desk. “I thought: we have to do something about it.” Sidney Spencer, a security officer who has joined the union, along with his entire team, agreed. “I feel like finally somebody listens to us and fights with us. This is something I never felt before in all the time I lived in this country.”

The UVW is a small, independent union who have taken on major employers in recent months including the Daily Mail newspaper, Topshop, and Kensington and Chelsea council.  The union have promised fresh strikes and disruption in the future if the workers’ demands are not met.

“Today we have seen the movement for fairer pay and working conditions spread across departments through the heart of government, bringing together more militant organisations such as UVW with established traditional trade unions like PCS,” Shalmy told ThisWeekinFM. “All employers who try and hide behind outsourcing contracts to evade their responsibilities to staff, including the government itself, have been put on notice - pay your workers a living wage or face the consequences.”